An error has occurred, please contact the Service Administrator. 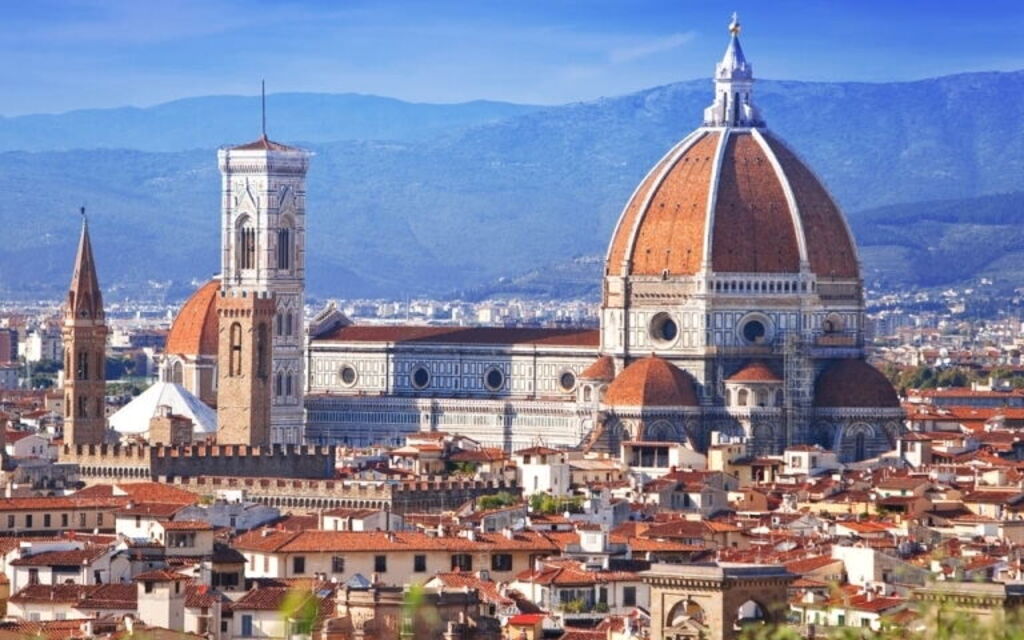 Florence, with its immense cultural and artistic patrimony, is universally recognised asone of the most beautiful cities in the world. As it is set in a charming amphitheatre of green hills, vantage points such as the hill of Fiesole offer stunning views of the whole city.
Italy’s eight largest city, Florence was already an important centre in the Middle Ages, but reached the height of its fame and influence in the Modern Age under the Medici family, who sponsored the creation of much of its artistic heritage. It was Italy’s capital city from 1865 to 1871.
The title “cradle of the Renaissance” sums up in full the artistic and cultural riches of the city, a true open-air museum which offers visitors the sight of majestic basilicas, squares crowded with monuments and of course art galleries with a plethora of great works.
The beating heart of the city is Piazza della Signoria, flanked by the Palazzo Vecchio, the city’s ancient centre of power, the Gallery of the Uffizi, one of the most frequented museums in the world, and the Loggia dei Lanzi, with its white sculptures. Just a few paces further on, we come to the majestic Piazza Duomo, with the imposing Cathedral of Santa Maria del Fiore, Giotto’s Campanile and the Baptistry of San Giovanni.
No postcard from Florence can omit the picturesque Ponte Vecchio, one of the city’s indelible symbols, and the only bridge in the city not destroyed by the Germans during XXII.
Another symbol of Florence is the Basilica of Santa Croce, which also gives its name to the picturesque square facing it, at one time the site of the most historic games of Florentine football, and where still today is played out the Torneo dei Quattro Quartieri (the Four Quarters Tournament).
Another monument not to be missed is the Basilica of Santa Maria Novella and RomanesqueSan Miniato a Monte, in the area of Piazzale Michelangelo, without any doubt the most impressive and characteristic of the city’s observation points, offering a panorama not to be missed, especially at night time.
Testifying to the noble history of Florence there is also a splendid legacy of civil architecture, with exceptional examples such as the Palazzo Medici Riccardi, Palazzo Strozzi and the imposing Palazzo Pitti, which hosts galleries and collections of various types.
So, our advice? If you decide to visit Florence, don’t forget several pairs of comfortable shoes: the city’s exceptional beauties are not all walled in museums; they are to be discovered by breathing in its streets, crossing the Ponte Vecchio, strolling round the stalls of the open air market of San Lorenzo or relaxing in the Boboli Gardens. 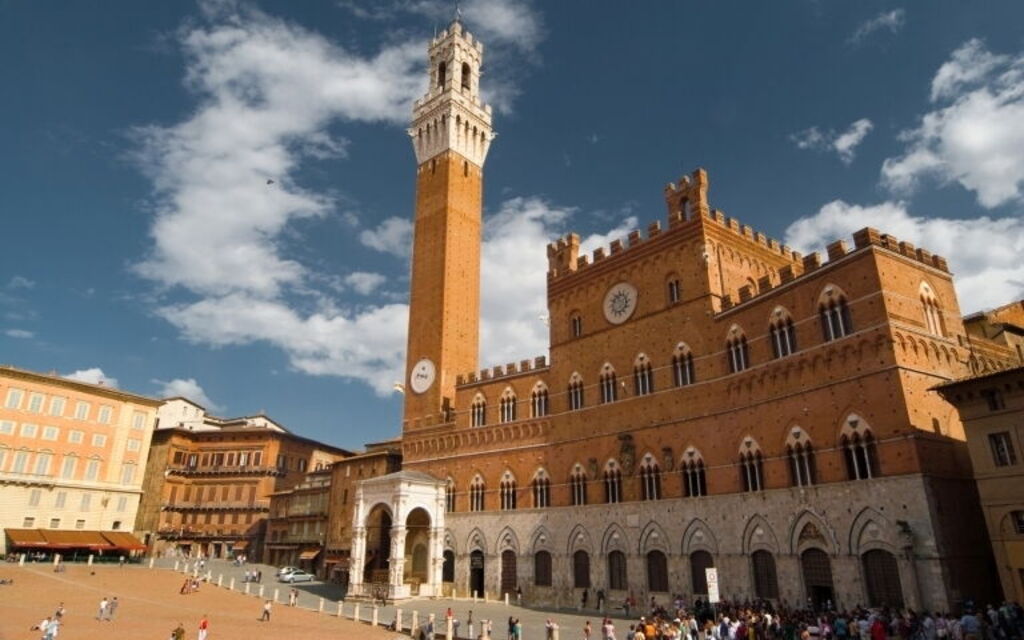 Siena, the Val d’Orcia and the hills of Chianti

First-time visitors to Siena will undoubtedly be struck by the wealth of its artistic legacy and the beauty of its historic centre, declared by UNESCO to be a World Heritage site.
The finding of Etruscan archaeological remains in the historic centre leads us to believe that the city was founded by the Etruscans. It was an important trading crossroads in Roman times, and it consolidated its strategic position in the Middle Ages, and indeed rivalled Florence for the domination of northern Tuscany.
These two cities still today ‘dispute’ each other’s dominion over Chianti, a territory of unrivallednatural beauty and food and wine riches, with fascinating towns and medieval castles. But the true jewel in the crown of this area is San Gimignano - the city of towers - which shares with the municipalities of Chianti the splendour of the Middle Ages.
To the south of the city, we find the Val d’Orcia, an important nature, artistic and cultural park, recognised by UNESCO as a World Heritage site, since it is “an exceptional example of the way in which the natural countryside was re-designed in Renaissance times to mirror the ideals of good governance and to create an aesthetically pleasing image”.
The city of Siena rises on three hills which converge in the pulsing heart of the city - Piazza del Campo - an imposing square with a distinctive shell shape.
Via Pellegrini links Piazza del Campo to the nearby Cathedral of Santa Maria Assunta, Siena’s Duomo, whose imposing marble structure is matched by an interior of spectacular beauty, and whose masterpiece is its floor – unique of its kind.
A sud della città, troviamo invece la Val d’Orcia, importante parco naturale, artistico e culturale, riconosciuto Patrimonio mondiale dell’umanità dall’UNESCO, in quanto “eccezionale esempio di come il paesaggio naturale sia stato ridisegnato nel periodo Rinascimentale per rispecchiare gli ideali di buon governo e per creare un'immagine esteticamente gradevole”.
Right in front of the Duomo is the former hospital of Santa Maria della Scala, which up until a few years ago still functioned as a hospital but is now a museum complex where visitors can browse among the art treasures of the National Archaeological Museum and visit its mysterious underground regions.
Just a stone’s throw from Piazza del Campo is Piazza del Mercato (Market Square), where at one time the cattle fair took place; it is marked by its particular 19th century arcade, known as the “Tartarugone”.
Since they are grouped quite closely, the city’s attractions can be visited in just a couple of hours, but Siena’s beauties in actual fact are conceded little by little: a stroll through the city brings you to the beautiful Piazza Salimbeni, pass through the stylish Via di Città and you will discover the private collection of the prestigious Chigi-Saracini Palazzo.
As well-known as the beauty of the city’s historic centre are the mad antics of its inhabitants – something we invite you to discover for yourselves! 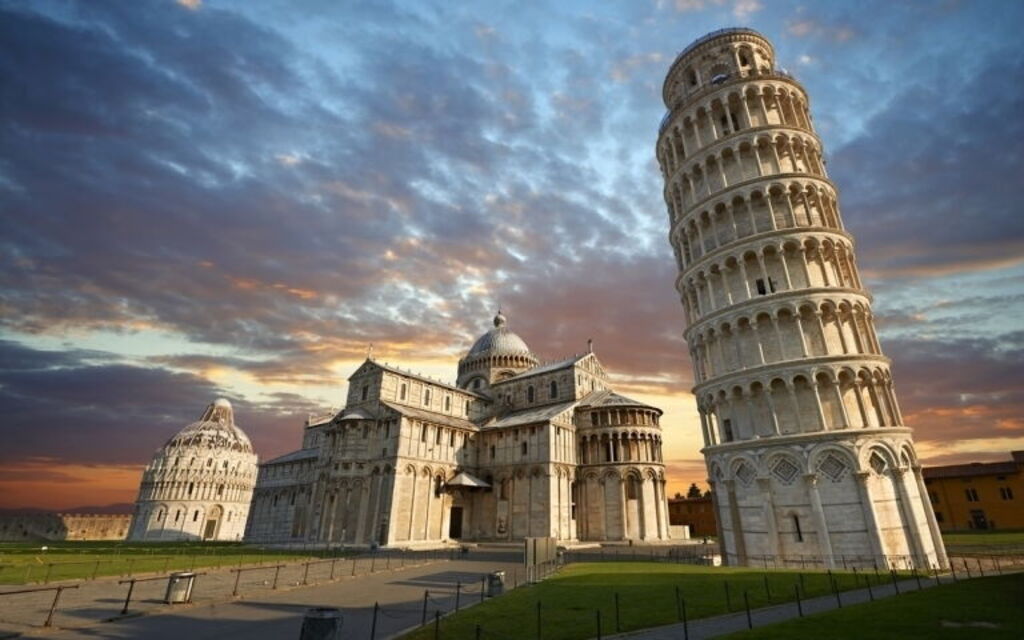 Lucca and Pisa, small gems of north-western Tuscany, are two exceptional città d’arte, and due to their proximity to Versilia they offer an excellent opportunity to fit a cultural interlude into a seaside holiday in Tuscany.
Lucca’s origins are uncertain, but it was certainly an important Roman centre and signs of this period are evident: in the grid structure of the streets of the historic centre; the shape of its Piazza, at one time the site of the Amphitheatre; and today’s Piazza San Michele, the ancient Forum.
Another striking historic testimonial are the ancient Renaissance curtain walls which surround the whole city and indeed are its symbol worldwide. So you have “Lucca Fora” and “Lucca Drento” – the city outside and inside the walls. You can either choose to walk along the paths in the shade of the walls or discover the heart of the city, with its fine Duomo, the picturesque Piazza dell’Anfiteatro, and the Guinigi Tower, the only one of its kind with an unexpected hanging garden.
The fascination of Pisa, an ancient Maritime Republic which for many years was the undisputed queen of the Mediterranean, has been limited in error to its famous Leaning Tower. But Pisa is much more than this, albeit unique, symbol which not by chance is situated in the so-called Piazza dei Miracoli, whose name comes from the extraordinary concentration of religious buildings at this site.
Pisa is a city rich in monuments and museums which bear testimony to its glorious past; a city which will astound you, with the romantic stretches of its pathways along the Arno; an important University centre, young and dynamic, and always the meeting point of travellers and poets.
Versilia is one of the best known seaside resorts in Italy, much appreciated for its beautiful beaches and the quality of its facilities. Viareggio, Forte dei Marmi, Lido di Camaiore and Marina di Pietrasanta offer well-equipped beach lidos and vibrant night-life. So these double attractions make Versilia the ideal spot not only for family holidays but also for young people in search more lively forms of entertainment.
If you find it difficult to choose between a seaside holiday and a cultural trip, Lucca and Pisa offer the ideal solution: the sea of Versilia with the bonus of the culture and artistic fame of Tuscany’s very soul.

Arezzo and the Valleys

The city of Arezzo was founded in pre-Etruscan times (in an area inhabited in prehistoric times) at the meeting point of three valleys, Casentino, Valdarno and Val di Chiana. Anatural passage for crossing the Appennines, its position made Arezzo a strategic centre in Roman times.
The symbol of the city is the Piazza Grande, a blend of various architectural styles achieving a harmonious balance. The square hosts the Giostra del Saracino, a horse race which also brings together a stylish procession of actors wearing medieval costumes.
The very ancient Pieve di Santa Maria is felt by many to be the most beautiful Church in Arezzo, and one of the best expressions of Romanesque art in Tuscany. Other interesting religious buildings are the Church of San Domenico and the Basilica of San Francesco, which contains a striking collection of masterpieces, including ‘The Legend of the True Cross’ by Piero della Francesca. Nor should we omit mention of the Gothic Cathedral of San Donato, set at the summit of a 14th century flight of steps and with some splendid stained glass windows.
There is no lack of museums such as Petrarca’s House, the Diocesan Museum, theMuseum of Medieval and Modern Art and the Mecenate Archaeological Museum. The richly frescoed walls of Palazzo dei Priori, now the City Hall, are also well worth a visit.
Traces of Roman domination are to be found in the great Amphitheatre built in sandstone and brick, to one side of which was built a convent of the Olivetans, today an Archaeological Museum.
A splendid panoramic view over the city can be enjoyed from the Medicean fortress on the Hill of San Donato, near which is the most ancient and charming of the city’s parks.
Also well worth a visit is the main cultural and tourist centre of the Arezzo portion of the Val di Chiana: Cortona, one of the most characteristic cities of central Italy, which preserves evidence of its 3000 years of history.